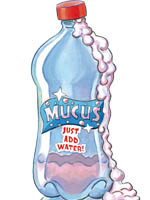 Just like your house needs cleaning, vacuuming and dusting, so does the inside of your body.

To help you get rid of some of the dirt in your home, you may need to use a cleaning fluid. Your body makes one of its own – known as mucus.

In order for it to work properly, this mucus must be diluted with water.

Your body refers to an instruction manual in order to keep you alive. We call these instructions DNA. Some of your DNA tells your body to make a special gate.

Once made, this gate (known as a channel) must open to let out the water which will dilute your mucus. The instructions for this gate include hundreds of separate steps.

The vast majority of Cystic Fibrosis is caused by a mutation known as an F508 deletion.

This means that the DNA instructions (and the Dinky Amigos that code for them) for step 508 are missing. Unfortunately these instructions were really important for two reasons.

1. Without the instructions for step 508, this piece of gate cannot be made. This means that the gate is broken. The body doesn’t like broken gates and throws them away.

2. If the body tries to use the gate, despite the missing piece, it won’t open. If it doesn’t open, water can’t get out and dilute your mucus.

The role of Orkambi

Orkambi contains two types of drug. The first is called lumacaftor which stops your body from throwing the gate away. The second is known as ivacaftor which prises the broken gate open so water can get out and dilute your mucus.

These two drugs do their best to replace the missing instructions at step 508. So if your Cystic Fibrosis is caused by DD508, Orkambi will help dilute some of your mucus by enabling the water to come out of the gate.