Cartoons have been around for as long as we have had moving pictures. They offer us a world where real life rules don’t exist and characters can get away with almost anything.

One of the favourite themes is the ability of the characters to survive the most excruciating pain. Burning, decapitation, long distance falls, crushings, and generally being shaken and stirred. No sooner is it over, they bounce back as good as new.

We animals are slightly less fortunate. There are lots of cartoon capers that our flimsy little bodies just cannot take, but for something not quite so extreme, our bodies are primed and ready to dive in.

I’m talking pain. Not the most pleasant experience, but generally unavoidable, so our biology has done it’s best to shield us from the worst effects.

Today I am in a gene known as the POMC.

Apparently you humans make a big deal of pain and pleasure. You even try getting one so you can experience the other. And quite often it works! That’s because the two really are related and it’s all down to us.

Me and over 83 thousand friends and cousins work – sometimes around the clock – for you in the POMC gene. We are constantly on the alert, ready to jump to it at a millionth of a notice.

We are waiting for a signal from a part of your brain called the hypothalamus. It lies at the front (just behind your nose) and when it gets stressed, we know about it!

Your hypothalamus responds to a signal from another part of your body. If you have been cut, twisted, hit, burned or hurt in any way, we get woken up. No one cares if it’s two o’clock in the morning! 800 of us have to line up immediately to provide instructions to the cell builders. Those instructions make something scientists call pro-opiomelanocortin (or POMC for short).

We all have to work as quickly as we can, because whatever it is, is causing you pain. As soon as our POMC product is made, different workers come and chop a bit off the end. This bit is known as an endorphin. There are three types of endorphins and they are all made by chopping a bit off the end of our POMC product. The longest one will ease your pain the best, so the workers have to be very careful to chop off the right amount. Once chopped, this endorphin is rushed to the edge of a nerve cell in your brain.

Nerve cells in distress are a complete nightmare! They whine constantly and can’t keep anything to themselves. If something dreadful has happened to your body, these nerve cells rush to tell all their friends about it. They let them know exactly where you have hurt yourself and how bad it is. Honestly, talk about drama queens!

Eventually they all get the pain message and you find out because a certain part of your body really hurts. 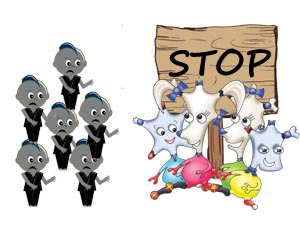 Our endorphin tries to quieten them down by stopping your nerve cells passing on their messages. We make absolutely tons of endorphins which stop loads of messages. If you are not too badly damaged, this works really well by itself and you might stop noticing that something hurts.

If you are in more pain than this, though, then just stopping those messages is not going to work without a back-up plan.

So we have another trick up our sleeve.

Our endorphins have to rush in and stop these messages too. But nerve cells love sending messages, so instead of sad ones, our endorphins encourage them to send happy ones instead.

Once a few of these happy messages get going in your body, you feel great! You might even begin to feel a bit euphoric.

We generally live and work in the nerve cells in your brain, but there are also loads of us at work in your immune system too. This is really handy, as we can rush to the injury site ourselves and start sorting it out there and then.

Too much of a good thing

The combination of no pain messages and loads of happiness messages works really well. You stop hurting and instead feel really great. Sometimes you still sense the pain, but you are feeling so good it doesn’t really hurt. We keep making the endorphins for as long as you need them.

Once the happy messages start though, our endorphins begin to hang around with nothing to do. They congregate together in groups, blocking access to the nerves. When there are too many, there is no point in sending anymore as they can’t get near the nerve anyway. So we stop giving the builders instructions and they have to stop making the endorphins.

Sometimes we just can’t do our job quickly enough, or you are so badly injured that there are just too many messages from the nerve cells for us to stop. You need extra help in the form of painkillers.

Luckily plants have already thought of this. Their Dinky Amigos can’t help with the endorphins, but they do give instructions to make things called opiates. These do a similar job to our endorphins. You might know them as morphine or codeine. The best place to get them is a poppy.

Sadly, scoffing an entire poppy isn’t going to help you. The opiates have to be extracted and are then generally packaged into a tablet or as a liquid. Not satisfied with just extracting these painkillers, scientists have made loads more using morphine and codeine as templates. One of these is heroin.

Some people get really addicted to the happy messages floating around, which makes these opiates quite dangerous. They should only be used in the most extreme pain.

We may not be cartoon characters, but thanks to our endorphins, we are able to resist a lot more pain than we might think.

Workshops run to approximately 60 minutes and can accommodate as many children as you have space for!

We use cookies to ensure that we give you the best experience on our website. If you continue to use this site we will assume that you are happy with it.OkNo, thank-youPrivacy policy
Revoke cookies