There are a set of instructions in your body which make a specific gate (the science name for this is “ion channel“). Around 200,000 Dinky Amigos work together to make the instructions for this gate. 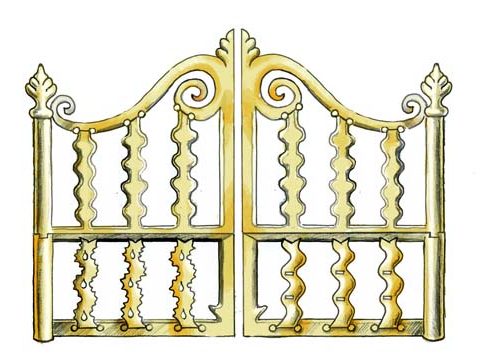 Some of these Dinky Amigos are not always on their best behaviour. There’s barging and shoving, swapping and disappearing altogether! Sometimes this leads to a disease called Cystic Fibrosis.  Scientists currently know of over 2030 ways in which badly behaved Dinky Amigos can cause this disease. We would like to tell you about some of them.

Hi – Tristan here. Normally Alina gets to do all the talking, so I thought I’d get in first

We’re all here in the CFTR gene (which is what scientists call our group. We’re the ones that make instructions for this gate). Some of the most badly behaved Dinky Amigos cause a bit of trouble every now and then.

To make your instructions, we Dinky Amigos have to line up together a certain order.

Some of the other Dinky Amigos that are not in our group get a bit jealous. So they BARGE IN to our line. They don’t ask permission, they just pile right in and stand where they want to. Scientists call this an “insertion“.

There are nearly always problems when this happens because it messes up our instructions. (It’s a bit like someone taking a thick black pen and writing some gobbledegook in between the letters of a word in your favourite book. If you read it, that part of the bfghtthhook doesn’t make sense anymore.)

There are loads of these insertions. Mostly just one or two of the more boisterous Dinky Amigos muscle their way in for a laugh. But sometimes there is a bigger rush.

One day I was busily chatting to a cousin in the line, when EIGHT Dinky Amigos smashed their way in between us. This is really rare, but it is still very RUDE! What is worse, is that it could cause my person to get Cystic Fibrosis.

Scientists call this type of behaviour an insertion.

This particular insertion is called c.163_164ins8 but is more commonly known as 295ins8. The “ins8” bit lets other scientists and doctors know just how rude those 8 Dinky Amigos have been. the “163_164” lets them know exactly where it has happened. The name doesn’t help cure the cystic fibrosis but it does let doctors and other scientists know what to look out for if it happens again.

If Tristan can have a go at talking to you, then so can I. I’m in the CFTR gene too and I want to let you know that Alina is not always as goody-two-shoes as she makes herself out to be.  Don’t get me wrong, she is great and she does do loads of stuff to help. But sometimes she’s as bad as everyone else.

As you probably now know,  the CFTR gene is not always a safe place to be. There are pockets of unruliness all over the shop. I try and avoid all of that, but it’s not always easy.

Like the time I was busy in line, making instructions and minding my own business. I went to the dance as normal.  (We all dance, it’s how we make you grow.)  Every Dinky Amigo has to dance whether they like it or not. Personally I think it is a great thing and really enjoy twisting and turning and finding new partners.

There I was, having a great time, following the music when Alina barged in! I don’t mean we bumped into each other. No, I mean she nipped in, elbowed me out of the way and took my place in the line-up. It was such a shock that I just stood there and let her do it.

That was a mistake.

She danced off with all the others and next thing you know, she is busy making the instructions for my part of the gate. That didn’t work out. Her being there instead of me changed those instructions. Instead of telling the cell builders which bit of the gate to build next, she told them to stop building entirely!

The problem is, that now your gate doesn’t work and that might mean you have Cystic Fibrosis.

Scientists call this type of behaviour a substitution.

This particular substitution is called c.3846G>A. The number tells scientists exactly whereabouts in your DNA I am – or rather was. The G>A bit tells them that Alina snuck in and pinched my spot in the line-up. (Another name for it is  W1282X. The X means that Alina has told the builders to stop.)

A swap like this is more common than you might think, especially in certain groups of people. Scientists also have a test for it. If you show signs of being poorly they can check.

When Alina moves in, she doesn’t do what I did. Nope, she has her own way of doing things and that includes our instructions. Hers are different to mine, which caused the gate to be different (and broken!). Scientists call this a missense mutation. It only means that the builders can still read an instruction, but it isn’t the right one.

This isn’t the only time Alina shoves me out of the way, either. In another substitution (called c.1652G>A) she does exactly the same thing! This happens a lot more than you might expect – especially in places like Asia and Africa (where there are less people with Cystic Fibrosis).  The more common name for this substitution is G551D.

Alina here at last! I’m going to tell this story.

One of the things some Dinky Amigos can do in our CFTR gene is run away from it. Even though our estate is a bit rough, we all generally like it here. Very few leave entirely. But when they do, oh my goodness do they cause a problem.

It’s quite a while since it happened but there had been a bit of a tiff. It was quite a big argument and was making people ill. In the end Crispin, Tristan and one of our cousins decided to leave. They had had enough. We all begged them to stay, but they were adamant they were going.

Nobody noticed at the beginning, but they had taken the instructions for the key to the gate with them. So now the gate won’t open and you might have Cystic Fibrosis.

These particular runaways are rather famous (or should that be infamous?) around here because they have disappeared from the instructions of so many people.

Scientists call this type of behaviour a deletion.

This particular deletion is called c.1521_1523delCTT. The number tells scientists where to look on the bit of DNA that give definite instructions. The “delCTT” bit tells them that those naughty Dinky Amigos have run off at this point.

This deletion is really common in people with Cystic Fibrosis. Approximately 90% have at least one copy of it. There are loads of other names for it too. The most common ones are probably DDF508 and Phe508del.  This deletion affects so many people, I have written a book all about it.